The Central Market of the South
The Rugless Family 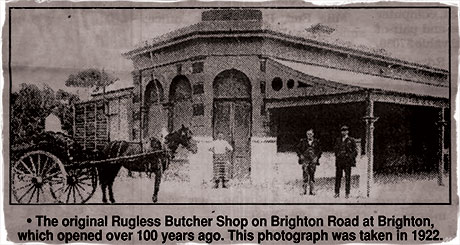 The Rugless family have a strong and proud tradition of shop trading in the Brighton area spanning three generations. Claude Rugless owned butcher shops in the area and lived in Edwards St, opposite what is now Brighton Central Shopping Centre. He raised four boys – David, Peter, Brian and Colin – on his own following the death of his wife from polio.

Three of the brothers, Peter, Brian and Colin, became involved in their father’s butcher business, forming “Rugless Butcher Shops” with Claude and also their uncle, Reg, owning more than 20 butcher shops throughout the 1970s and 80s. David went on to become a well-known dentist in the Brighton area.

In the early 1980s, fearing the demise of the ‘corner butcher shop’ with the expansion of supermarkets, the three Rugless brothers ventured into the supermarket business themselves and since then have owned and operated 10 supermarkets.

Following retirements and consolidation of the business over the past decade, Colin’s son, Tim, now operates Brighton Foodland and Brighton Cellarbrations liquor store at Brighton Central. Tim is pleased to be continuing the Rugless family tradition and bringing you an exciting new era of shopping in Brighton.